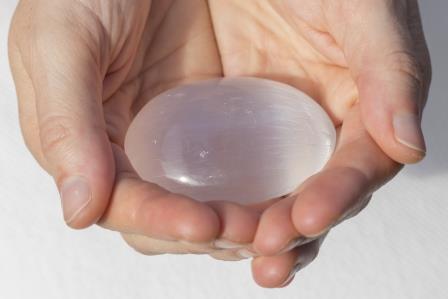 Selenite is one of the most powerful crystals, for its ability to open the crown chakras to spiritual guidance, and for anchoring very fine vibrations on Earth, providing enlightenment and clarity.

Selenite is associated with Greek Goddess Selene; it is said that she travelled across the sky to get to Endymion – the love of her life. In return for eternal sleep each night she asked that Endymion was blessed with beauty and everlasting youth.

The name ‘Selenite’ is taken from Ancient Greece and means Moon Rock. Selenite has long been considered to be a magical stone, with unique powers that heighten psychic ability.

In fact, ‘Selenite’ is often referred to as ‘Frozen Divine Light’, as it can bring about divine light to anything it comes into contact with. Literally raising the energetic frequency.

The crystal is often used when folk are calling on Spirit Guides or Guardian Angels, for its ability to facilitate communicating at a higher level.

It is also said to be useful during hypnosis and astral travel, where it assists in more intense and vivid recollections. It can also be used as a healing power during past life regressions.

Selenite has a very calming influence, so it is great to carry on your person when you are under pressure. Whether that be an interview, an exam of some sort etc.

The crystal also provides a sense of hope and renewed energy, so is very useful when you are getting over a relationship break-up or coming to terms with some past trauma.

Sometimes the stone is called the ‘sword of awareness’, due to its ability to cut through our learned habits, and negative thoughts. So that we are much clearer in our choices and can move forward feeling certain about our direction.

Meditating with Selenite should bring about multiple benefits, placing it above your head can provide a connection with the highest powers of divine light.