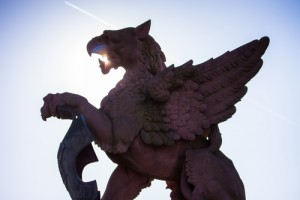 What is the Griffin?

The Griffin is a fascinating mythical creature that is usually depicted with the body of a lion and the head of an eagle. It is sometimes depicted with a long snake for a tail. This mixture indicates strength and intelligence; the lion is regarded as the king of beasts and the eagle, the king of birds. It used to denote strength, military courage and leadership.

Depictions of the Griffin are most commonly featured in the art and lore of Ancient Greece; however evidence of Griffin imagery can be found dating back to Ancient Egyptian art as far back as 3300 BC.

Griffins are normally known for guarding treasure. They were thought to be protectors of gold sources, particularly in India. These winged creatures would find gold in the mountains and built nests from it, which they kept a hostile guard over to protect from hunters.

Griffins were well known for their speed and ability to fly, as well as their power and wisdom, which made them a popular choice for many armies and royal families who assigned them to protect their treasure.

In Greek Mythology, the Griffin was regarded as more powerful than an ox whilst having the ability to fly, thus the Griffin was chosen to pull the chariot of Apollo, the sun god around the Earth.

In other mythological records, the Griffin stands for undying devotion. Depictions of Griffins in many cases are found on tombs, where they still guard their masters. Griffins are usually used to symbolise strength, virtue and honour. Their magical power makes them powerful allies or formidable enemies.

Though now relegated to the realm of myth and legend, the Griffin has proved to be one of the more enduring mythical creatures and still manages to capture people’s interest to this day.