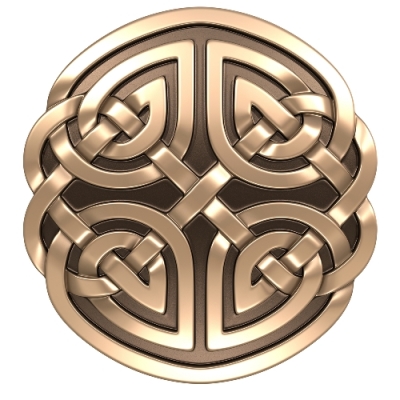 Celtic tradition marks each turning cycle with the ‘Wheel of the Year’, the Autumn Equinox on the 22nd September brings in ‘Mabon’, celebrating the mid-point between Lammas (1st August) – the start of the harvest, and Samhain (31st October), representing the end of harvest. During Mabon the nights begin to draw longer and a winter shadow is cast over the land.

The Wheel of the Year got me thinking about other Celtic symbols, many of the designs have significant meaning, and often the intricate art has made its way into popular society through pieces of jewellery, clothing, soft furnishings and even tattoos – but you may not be aware of the significance of any particular design.

The Lovers Knot – This often looks like the number 8, in fact they are two infinity symbols that intertwine, and the meaning is that of two people coming together. It is one of the simplest knots, and these would have been exchanged, in the same way that we now exchange wedding rings.

Trinity Knot – A Trinity Knot has three points (3 was a very sacred number to Celts), within this knot the points represent the triple aspect of the Celtic Gods – or put more simply ‘The Holy Trinity’. Equally it can represent the planes of existence: mind, body and spirit.

Knotwork Cross – This type of knot is an interleaving pattern that ultimately forms a cross. Just as its design looks like a map of roads, it signifies a crossroads you may find yourself at.

Interlace – A Knotwork Interlace are longer patterns, their patterns may depict nature, people, animals or just shapes – essentially they are many knots or designs that meet up and form never ending circles. It is supposed to depict a connectedness, that everything in the cosmos and Earth is related and the repeating looping suggests a theme of eternity.

Labyrinth – A Labyrinth looks like a maze, but unlike a maze there is only one path, which takes you from the entrance to the centre. The symbolism is of a pathway leading you to the centre of your spirit.

Triskele – The design of a Triskele is of three spirals that radiate outwards. The name possible derives from the Greek word ‘Triskelion’ which literally means ‘three legged’. There are many possible definitions for this symbol like: spirit, body and mind or past, present and future. But also it is supposed to represent a balance of inner consciousness with your outer self.