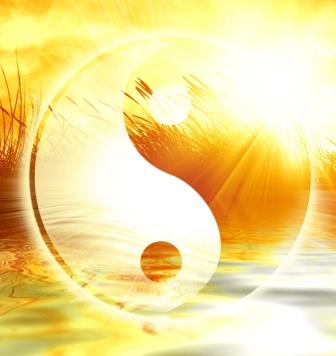 The I Ching describes the concept of ‘chi’ as an invisible force, essentially three energies unified: earth, heaven and human. The I Ching embraces Chinese philosophy in many forms, from Confucianism to Taoism.

Taoist theory says that Chi manifests through Yin and Yang, Traditional Chinese Medicine works on the basis that mind, body and spirit and the interplay of yin/yang impact, health, disease and wellbeing.

You are no doubt familiar with the symbol of yin/yang – generally a black and white t’ai chi symbol, representing complementary halves that are never ending. Yin is denoted by the black half, and yang is the white half. The outside circle has meaning – essentially a void or ‘Tao’, where the two opposing energies emerge. The small circles in each half symbolise the dynamism of the energies and that nothing is static. The whole icon demonstrates that yin and yang have elements of each other, they make life interesting and it is a balancing force.

Another side to yin and yang is that one is negative and one is positive. Yin is considered feminine; it controls Earth. It is a darker, colder, still, yet soft inner-energy, that also governs non-living entities. Yang is a more positive active energy, controlling heaven. It’s considered to be masculine, and provides a warm, light, unyielding, moving and living outer-energy.

To make these opposites easier to understand, here are some examples:

Yang – and the opposites – Yin

The principles of yin and yang are seen in the Chinese Book of Changes (I Ching), the idea being that we can read the yin/yang and male/female energies through the 64 hexagrams. The qualities of yin/yang do wax and wane, and so any situation being consulted at a particular time will be a careful balance of these energies. Because of course, when yang is achieved as a total state, it will change to yin! Thus, demonstrating the complexities and ever-changing nature of human beings and the flux of their lives.

Don’t forget that our Special Spring Offer is up and running.

You can use the discount code as many times as you like during the offer period.