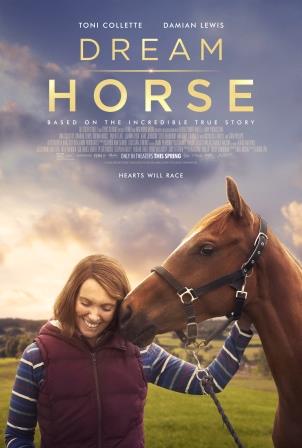 The film is an adaptation of a true story. In fact, the real-life tale was first featured at the Sundance Film Festival in 2015, as a documentary called Dark Horse.

The story is about one women’s mission to breed and race a horse to championship standard. At first-glance this might not seem that extraordinary, but the character Jan Vokes, played by Toni Collette works as a barmaid and cleaner in a down on its luck village in Wales.

The community that she lives in all need a little joy and hope in their lives, somehow Jan convinces her fellow friends and neighbours that they should all invest a little money to make her racehorse dream a reality.

The action unfolds as the ‘Dream Horse’, rises through the ranks. Taking on a certain type of establishment as an outsider, proving he can be a match for the most expensive horse.

Slowly but surely the horse provides the escape from everyday life that Jan wanted and needed, and takes everyone in the community along for the ride.

At its heart this film is about triumph over adversity, and that dreams really can become reality. If you liked the movie The Full Monty, then you will like this. We all want to back a winner, and the British in particular love an underdog story.

Damian Lewis features as Howard, who actually has experience of racehorses and is a tax-advisor. His job is rather soul-sucking, and his previous investments nearly lost him the family home!

The character of Brian, who is Jan’s husband also has a key role, played by Owen Teale, he has arthritis and as such is out of work. Supporting the theme, that everyone in the village hasn’t had much to be optimistic about in quite some time.

Toni Collette has never been one to shy away from unusual roles, her breakthrough coming way back in 1994 with Muriel’s Wedding. She brings the same focus and dedication to this role, that shows just what a connection people can have with animals – horses included. As she shows both her nurturing motherly side (helping to heal the empty-nest feeling), and the horse owner that focuses on the track performance.

Dream Horse was originally due to show in UK cinemas from the 17th April 2020, but due to the pandemic was delayed until 4th September 2020.